Modern slots have lots of features. As you know, top-tier providers make sure they look good and play smoothly on all devices. Apart from the visuals and mechanics, some of the best online slots come with interesting features. One such feature is the Wild symbol.

Most of the top online slots are slots with Wild symbols. Thanks to that feature, you can enjoy an exciting range of games. There are countless slot games that have a Wild symbol. But what makes this symbol so special?

The Role of the Wild Symbol

This symbol appears unexpectedly on the reels, and the role of the Wild symbol in slot games is to substitute the regular symbols. This way, you get a helping hand when making winning combinations.

However, they don’t substitute the other special symbols. You see, most slots will feature Scatter or other types of Bonus symbols. Sometimes the Wild symbol will have the same function as the Scatter symbol. Also, depending on the game, this symbol will be able to form combinations on its own or not.

All slot titles have to have good features. The universal ones they share are the volatility as well as the RTP rate. Both elements affect the appeal of the game and the gameplay itself. One of the most common features you’ll come across is the jackpot or lack thereof. Progressive jackpot slots are super popular. Some titles have a classic theme while others have mythology, fantasy, adventure or other themes, many are online slots that feature Wild symbols.

The Variety of Wild Symbols

All Wilds have a traditional role but, depending on the type of Wild symbol, they’ll have an extra feature to offer.

Some of the Wild symbols act as multipliers. This means that they can substitute for other symbols and add extra credit to the win. All in all, there’s a variety of Wild symbols out there. 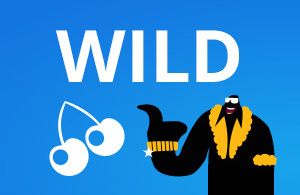 Some of these include the Expanding Wild, Stacked Wild, Sticky Wild symbols, and more. They all bring amazing prizes.

A very common type of Wild symbol you’ll come across is the Stacked Wild symbol.

The difference is that it can cover different rows or reels, i.e. vertically or horizontally. Sometimes, when you have enough of them on the reels, then the expanding feature will trigger. In other words, all of the stacked symbols will become Stacked Wilds.

In some slots with Stacked Wilds, you’ll see that the Stacked Wilds are part of the bonus feature. Sometimes this will be a separate mini-game. Other times it will be a free spins feature.

Another popular type of Wild is the Sticky Wild symbol.

The additional function is found in the name: Expanding Wilds expands itself when you also get a winning combination.

The basic Shifting Wild is the most common one. It is a Standard Wild with the ability to shift on the reels.

The other type of Shifting Wild symbol comes in the form of Shifting Reels. These slots have the ability to shift the reels.

Pros and Cons of Shifting Wilds

There are many benefits to Shifting Wilds slots. By moving from one spot to another they can trigger multiple winning combinations. Furthermore, they come with additional features. Multipliers and free spins can further increase the wins.

The cons of Shifting Wilds slots depend largely on the type of slot game.

We also have slot titles that feature a Transferring Wild.

The key to understanding these symbols is in the word "transfer". When they appear on one of the slot sets magic happens and you get loads of Wilds on all the reels.

Pros and Cons of Transferring Wilds

These Wilds can yield some massive wins. Moreover, they’re an exciting feature on the reels. However, like all other Wilds, they have a few downsides as well.

Are you familiar with Random Wild symbols?

The main thing to remember about Random Wilds is the fact that they’re unpredictable. They can appear at any time. That’s why some of the best slots with Random Wilds are so popular. Players have a chance to win some interesting prizes.

Pros and Cons of Random Wilds

Usually, Random Wilds appear in highly volatile slots. This means that the game will affect your budget in the long run. Also, slots with these types of Wilds are suitable for player’s that aren’t afraid to wait. So, if you prefer short-term rewards, steer clear of these games.

On the other side, Random Wilds can bring whopping prizes in the long run. If they come together with multipliers or are stacked, you’re bound to get a big prize. That’s why these types of slots are some of the best online slots you’ll run into.

❓How Does Random Wilds Work?

Well, it all depends on the slot title you’re playing. Sometimes the Random Wild symbol will only be a part of the base game. As to how it appears, the answer’s in the name. In other words, this Wild symbol appears randomly. You don’t need to trigger anything for it to show up on the reels.

Additionally, some of the best Random Wilds slots will have these symbols as part of their bonus features. Usually, this is the Free Spins feature. Together with some multipliers, Random Wilds can bring some interesting prizes for you.

❓Why Are There Slots With Wilds?

Yes, there are many types of Wilds in slots, but why do Wilds exist? Well, slots are known for repetitive gameplay. That’s why developers introduced Wild symbols. They take the mundane out of the slot titles and offer players a chance to win some prizes.

Moreover, they can help out a losing streak by appearing randomly. The sheer surprise of a Wild on the reels makes the slots much more exciting. What’s important is to have fun and with slots that have Wild symbols, you can do just that.

❓How to Activate the Expanding Wild Feature?

To trigger the expanding feature, you have to wait for them to appear. A certain pattern is needed for it to trigger. This means that either a winning combination of regular and Wild symbols will trigger the feature. Alternatively, this can be a winning combination of Expanding Wilds. These are Wilds that expand horizontally, vertically, or in a specific pattern. In the best-case scenario, these symbols can cover an entire reel and bring amazing prizes.

❓How Do Wild Symbols Appear on the Reels?

The rules of the slot title will hint as to where you can expect them. So, when you’re going through the best slot games, make sure to check them out. That way you’ll know what you can expect.

❓What Are Stacked Wilds?

According to the name, Stacked Wilds slot games feature a Wild that takes up more places on a reel. For example, this symbol will appear on 2 spots of 1 reel. Sometimes more of them will cover the reels. The ideal outcome is for one such symbol to cover an entire reel.

On the other hand, Stacked Wild symbols can cover the top or bottom reels in the game. Naturally, they work as substitutes as well. However, the expanding feature requires a combination of several Wilds symbols. In other words, you need to wait for a few such symbols to appear on the reels. All in all, it’s a simple enough concept to understand.

❓How Do Sticky Wilds Work?

To put it simply, Sticky Wild symbols stick around for a while. You can think of them as regular Wild symbols that appear randomly on the reels, but these Wilds don’t always appear in the base game.

Some of the best Sticky Wilds slots have these symbols appear in a bonus feature. Usually, you’ll find them on the reels during the free spins. They can stick during 5 free spins or more. Whatever the case, you’ll have a boost in wins. Since it’s a bonus feature, they might also bring some multipliers around.

❓How Do Expanding Wilds Work?

The majority of the best slots are Expanding Wilds slots. The key feature of the Wild symbol is the same. The twist is the second feature. In other words, when you know you’re playing an Expanding Wild slot then you can expect 2 things.

Firstly, the Expanding Wild is a standard Wild symbol. This means it will help you make winning combinations. It will do so by substituting the regular symbols in the base game. Secondly, it has an expanding feature. This lets the symbol expand on the reels to cover more rows and provide even more winning combinations.

❓What Is a Transferring Wild?

The Transferring Wild is similar to the standard Wild symbol. This means you can expect it to give you a helping hand as it appears on the reels and substitutes regular symbols in the base game. Besides that, it has another function. The Transferring Wilds occur on slots that have more than one set of reels.

The symbol appears on one side of the first set. There, it can take the role of a regular Wild symbol. However, these symbols can appear on the second set of reels. This increases the number of paylines and improves your chances of winning. Despite the base game, some of the best Transferring Wilds slots have these symbols in their bonus features.

❓How Do Stacked Wilds Work?

In Stacked Wilds slots you’ll get a combination of 3 Stacked Wild symbols triggers the expanding feature. The Stacked Wild can cover one reel, or the top or the bottom row.

The more Wild symbols you have in the combination the bigger your win will be. The Stacked Wilds comes with multipliers and will give you bigger prizes than in the base game. Since there are lots of Stacked Wilds slot games available, the Stacked Wild symbol comes in more than one form.

❓What Is a Wild Symbol?

The majority of online slots today have a Wild symbol available. The role of this symbol is to substitute for the regular symbols in a slot title. By doing so, this symbol helps players get winning combinations. You’ll also notice that the Wild symbol can’t substitute the Scatter and Bonus symbols.

In some instances, this symbol can take the role of a Scatter and trigger a special feature. However, the role of the symbol depends on the slot game. Depending on the game, Wild symbols will look differently. Naturally, you’ll run into more than one type of Wild symbol.